We’ve all had it happen. You’ve just been relaxing in your pool or hot tub, or maybe you’re just stepping out of a hot bath or shower…and you instantly regret getting out because now you’re not just wet, but cold as well, and your towel really isn’t helping as much as you’d like.

Thankfully, towel warmers are a huge help with this. If you have a towel warmer, you don’t have to worry about getting chilled when you step out of the shower; instead, you can wrap yourself in a warm and cozy towel that’s been waiting for you.

Like with all useful gadgets, though, there are some things you should know before going out to buy a towel warmer of your own. To help you with this, we’ve compiled some useful information about towel warmers, as well as our list of the top six towel warmers currently on the market.

Hopefully, with the help of this article you’ll be able to pick out the best towel warmer for yourself and your household.

At first glance, it may seem like all towel warmers are more or less the same. But there are in fact a variety of towel warmers available on the market, some with more functions than others. Here are the four basic types broken down:

1. Electric Towel Warmer, Direct Electrical Hook-Up – This is, as the name implies, the standard variety of towel warmer. One of these will typically be connected to the electrical system in your home and is operated via a switch or timer. These towel warmers almost always need to be kept a foot or more away from any source of water for safety reasons.

2. Electric Towel Warmer, Plug-in – Similar to the first type of towel warmer, the main difference with this one is that it isn’t hooked up directly to your electrical system; instead, it needs to be plugged into an outlet, like any other appliance. These are typically easier to install, since they don’t require an electrician to manage the wiring and installation process.

3. Towel Warmer with Radiator Capabilities – These types of towel warmers are useful if you want to save space by replacing your old radiator. A towel warmer like this will need to be connected to your hot water supply to function properly.

4. Hydronic Towel Warmers – These types of towel warmers run on electrical power like some other types, but the main difference is the way they conduct heat. Instead of metallic coils within the rack, hydronic warmers use a gel-like fluid contained within the bars to channel heat.

How to Choose the Best Towel Warmer

Selecting the right towel warmer for you mostly just depends on what you intend to use it for and where you plan to put it. Are you getting a towel warmer to use in conjunction with your pool or spa? Or do you just need something simple for your bathroom?

1. Price – Some towel warmers can be rather costly, while others aren’t very expensive at all. Make sure you choose one that’s comfortably in your price range. And remember, just because a product is more expensive doesn’t necessarily make it better; first and foremost your towel warmer should fit your needs.

2. Size – Some towel warmers are larger than others, so size is an important factor to consider depending on where in your home you intend to install your towel warmer. If you have a smaller house or apartment, you will need a smaller towel warmer.

3. Purpose – As mentioned before, what you plan to use your warmer for is the most important factor. Are you just heating up your towels, or do you want a towel warmer than can dry towels and clothing, too? Or are you looking for a towel warmer that can double as a radiator as well? Think carefully on what you want to get out of owning a towel warmer. 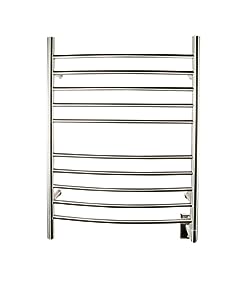 This towel warmer is made of Grade 304 stainless steel (meaning that it is not only incredibly strong and durable, but also resistant to corrosion and oxidation), is very straightforward to use, and heats up quickly.

This rack is wall-mounted along with the accompanying electrical box, comes with ten horizontal bars for hanging up towels, and both the horizontal and vertical bars are heated. It is capable of both heating up dry towels quickly as well as drying out damp or moist towels.

This towel rack comes with an on/off switch, but it is also possible to use this warmer in conjunction with a programmable timer of your choice, which is useful if you want to set it to only run at certain times of the day (this is particularly handy if you want to save money on electrical power).

Do use caution if you are near the rack when it is empty, though; there are some customer reports of accidental burns that occur when bumping into the heated bars when they are uncovered. 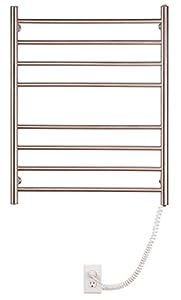 This towel warmer has six horizontal bars and is one of the cheapest options currently available on the market, making it an excellent choice if you want an effective towel warmer but don’t want to spend too much money on it.

This rack heats up very quickly and is also good for drying towels as well as heating them up. Do be careful, though; because it gets so hot, there is a chance of your towels becoming singed if left on the rack for too long.

This rack is also a good choice if you have a smaller bathroom, since it is slightly more compact when compared to similar products.

It is a plug-in product, however, so while you won’t need to stress as much over installing it and connecting it directly to your electrical system, it will need to be placed in close proximity to a wall outlet. 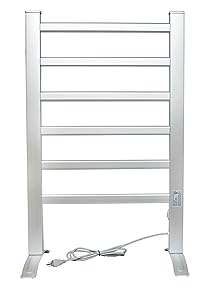 This towel warmer is another of the plug-in variety (with a cord that is six feet long). It has six horizontal bars, is made of aluminum, and can reach a temperature of up to 122 degrees Fahrenheit.

It comes with an on/off switch so that you can shut it down when you don’t need it, which will help you avoid wasting electricity.

This particular towel warmer can also be used as a free-standing rack, setting it apart from some other warmers that need to be mounted to the wall with special screws or brackets.

This makes finding a place to put it much easier, since it can basically go anywhere (this is especially useful if you need it for your outdoor spa or pool). It can also function as a radiator, making it a good multi-purpose option.

It is also very light-weight, and doesn’t take up very much room at all, making it a good choice if you live in a smaller home or apartment As with most towel warmers, be careful about touching it directly once it’s fully heated, because you might burn yourself.

4. Brookstone Towel Warmer – Best Choice for Ease of Use 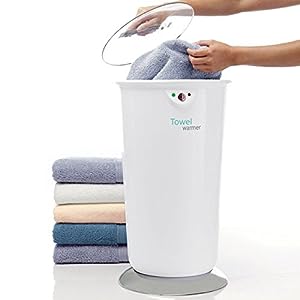 This towel warmer is unique in that, while it is a plug-in, it is not a rack; instead, it a free-standing container that can hold up to two large towels at a time (or even a bathrobe or blankets if you want!).

It also heats up very quickly; any items you place into the container will reach a temperature of up to 120 degrees Fahrenheit within about ten minutes.

The warmer will automatically shut off the heating process once it reaches this point, but your heated items will remain hot even after this, typically staying hot for at least an additional half an hour.

It also comes with a transparent lid, so that you can see the interior of the container at any time.

Do be aware, however, that this product reportedly can have a relatively short lifespan if used continuously; some customers have said that their Brookstone warmers lasted only about a year before the switch or heating components wore out.

Also, if you have small children, you may need to place this somewhere out of their reach or pack it away between uses; if they open it and touch metallic interior when the machine is on, they could receive serious burns.

5. Warmly Yours Infinity Towel Warmer – Best Choice for Use with Multiple Towels 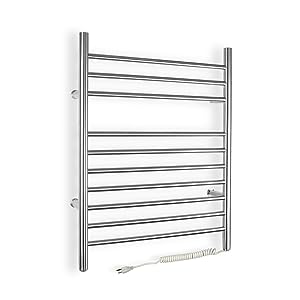 This towel warmer comes with ten horizontal bars and is available in two types: hardwired for permanent installation, or plug-in for temporary use.

The hardwired version comes with a programmable timer, so you can set your towel warmer to operate at specific times during the day; this is especially useful if you have the same routine every day, like showering before work or after the gym.

The plug-in version has a long cord and will function when plugged into almost any standard power outlet in your home. It’s also fairly lightweight, which is good if you need to move it between multiple bathrooms.

Also, while this towel warmer is not the only one on the market with a large number of bars (ten, in this case), it is the one that seems to be the best at holding multiple towels at once, thanks to the spacing between the bars.

Other towel warmers don’t always have enough space to actually allow for all the bars to be used at the same time; this rack does not have that problem, and you can fill it up with towels without worrying about overloading the rack.

It is worth mentioning, however, that the programmable timer that the product comes with is not particularly intricate or heavy-duty; it is rather simple and basic, so if you want a timer with more options, you may need to invest in a separate timer and switch out the old one. 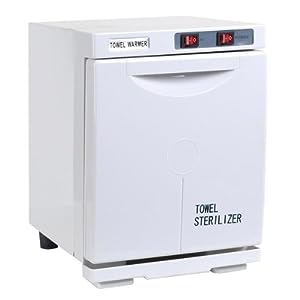 This towel warmer is very possibly one of the fanciest ones currently available on the market. Not only does it heat up your towels, but it also sanitizes them using UV light!

This warmer is also incredibly easy to use; it has a built-in micro-computer that you can use to regulate the temperature, a straightforward pull-down door on the front where you load in your towels, an inner chamber made of aluminum that conducts heat very well, and (as previously mentioned) a UV sterilizer will keep your towels germ-free.

It is a bit on the smaller side, though; it will fit a few smaller towels, but you might have some trouble fitting an extra large bath towel inside, so keep that in mind if you’re considering this particular towel warmer.

We hope that the information we provided for you in this article will be useful for you on your own quest to find the perfect towel warmer for your home. Feel free to leave a comment for us below if you have any comments or additional questions; we’re always happy to hear from you!

GET OUR LATEST TIPS AND REVIEWS!